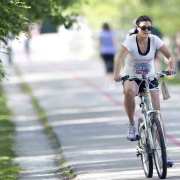 Originally built in 1847, the rail-trail pioneered in Indiana an already nation-wide vision: converting railways to greenways for recreation and commuter use. The Monon links commercial districts, schools, parks, the state fairgrounds and a dozen residential neighborhoods between Indianapolis and the northern suburb of Westfield.

Major features of this section include the bridge structures painted in the original Monon red. Much of the original structures of the railroad bridges were restored and new decks and railings were installed. The overlooks on the White River Bridge are very popular viewing areas. Major linkages within this section include the commercial areas of Nora and Broad Ripple, the Jordan YMCA, the Indiana School for the Blind, the Indianapolis Art Center, the White River and the Central Canal Towpath.

In 1997, the one mile trail section between 86th Street and 96th Street, was constructed. In order to provide a safe crossing of 86th Street, a new pedestrian activated traffic signal was installed just east of the trail. Railings were provided along 86th Street to direct trail users to this crossing. Parking next to the trail at 91st Street was constructed to alleviate parking problems in the 86th Street commercial properties.

The Monon Trail – completed in 2003 – Indianapolis section measurers approximately 10.4 miles from 10th Street to 96th Street in Nora, where it connects with the 5.2-mile Monon Greenway in Carmel then extends into Westfield.

The Monon Trail has been widely recognized by several organizations. In 1999, it was given the Millennial Trail Designation by the Federal Trails Program. In 2000, it was recognized as a Millenium State Legacy Trail, and in 2002 it was designated as a National Recreation Trail.

One of our favorite bogs, Historic Indianapolis, publishes an informative history of the Monon Trail.

The Rails-to-Trails Conservancy provides a descriptive overview of what to expect along sections of this awesome trail.